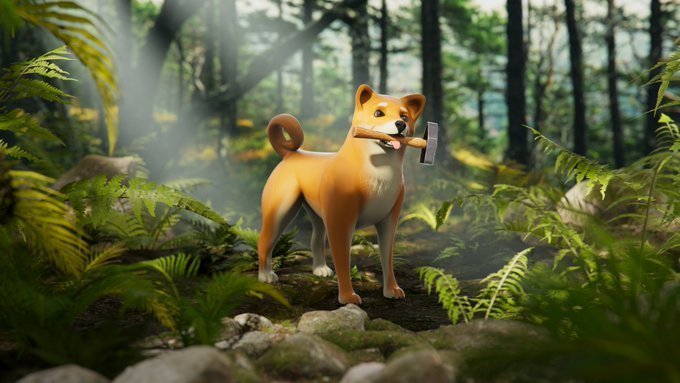 Shiba Inu team announced the entry Shiba inu token in the Metaverse concept to step with the trend.

Shiba Inu is the most popular crypto meme token in this industry after Dogecoin. Thanks to the shoutout of Tesla CEO Elon Musk, otherwise no one knows about this meme coin. In the last 30 days, the team behind the Shiba Inu project was planning to introduce its own game, however, there was no fixed date for this initiative.

On 24 January, the official Twitter account of Shiba Inu token tweeted that they are now moving toward a new height with its new upcoming project-based work. However not many details are available but as per tweet details, there are chances that the team will launch its game, or maybe it will be an entry phase of some kind of virtual reality-based game to the Metaverse.

No detail is attached about it through any link but here the team is giving Shiba’ Metaverse as a Shiberse. What will be the real thing with it, no one knows except the team but the teaser pic of this incoming work is surely giving a big impact in this industry.

Earlier this, around 5 days ago on 20 January, the Shiba Inu team retweeted a tweet on the new development project work on the Shiba Inu token. The actual retweeted tweet contained a blurry version of the picture that was posted by the team in today’s tweet.

When the first-time idea of Shiba Inu based game was in discussion than at that time reports noted that the Shiba Inu project team will first work to bring a video game but that game will not be on the Shiba network (in the actual no use case of  Ethereum based Shiba token) but the team will later shift the game on Shiba based ecosystem.

Besides this, the Shiba Inu project team is working to make a separate blockchain Network, Shibarium. And also the team decided to use the $BONE token as a native token of the Shibarium blockchain Network. That network will be dedicated to providing low-fee transactions of Shiba Inu tokens.