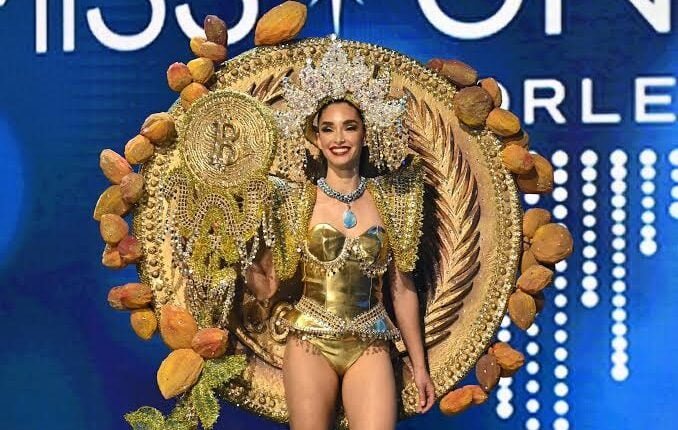 Alejandra Guajardo is a 27 years old model & actress from El Salvador. At the present time, she is representing El Salvador in the Miss Universe 2023 competition. During the National Costume Competition, she came on stage in a golden bitcoin outfit, holding a sceptre with a BTC logo.

In the latest, El Salvador reportedly announced that it will host Miss Universe 2023.

Earlier this in the Tokyo2020 Olympic game, in the Opening Ceremony, the South Korean broadcaster MBC represented El Salvador with a Bitcoin logo picture.

On 7 September, El Salvador adopted Bitcoin as the official currency of the country alongside the US dollar. For this decision, El Salvador president Nayib Bukele faced huge criticism from opposition political parties & also from many other global financial agencies.

To use Bitcoin for daily life payment purposes, the El Salvador government established 200 Bitcoin ATMs in the country and also launched a national digital Bitcoin wallet “Chivo”, to make Bitcoin payment adoption easy for businesses without any problem of Bitcoin price volatility.
The country’s government also planned to issue a “Bitcoin Bond”, so that common citizens can easily participate in the country’s Bitcoin adoption plan.

At present, the country holds a total of 2,381 BTC. Since Dec 2020, the country has been continuously buying one Bitcoin per day. Recently El Salvador passed a “Digital Asset Issuance” bill to give legal authority to the El Salvador Bond issuer agency to issue Bitcoin-Bond.

Read also: Former FTXUS president explains why he stepped down from FTX

Former FTXUS president explains why he stepped down from FTX

Ripple CEO believes XRP lawsuit will over in mid of…

Binance joins ACSS to stay in compliance with global…