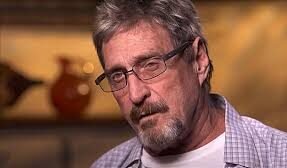 A report of Spanish Newspaper is saying that John McAfee Found Dead in a Spanish prison cell.

Johan McAfee was a Tech entrepreneur and antivirus software developer.

Almost every person in the tech industry and crypto industry knows about him.

Since he was a big player in the Antivirus industry, he turned his movement into the Cryptocurrency industry where he made Billions dollars of earnings.

Later he revealed how he manipulated the Cryptocurrency market and made lots of money to promote coins through his single tweet.

According to old reports, it was found that Johan McAfee was involved in many types of scams like Money Laundering and illegal dealings in Cryptocurrency.

And also it was found that he was promoting ICOs in an inappropriate way to make money.

Few years back, John McAfee was caught by the Spanish police regarding many types of manipulation scam and also tax related rules violation.

So Mr. Johan McAfee was in prison for a long time.

“Now the U.S. authorities are determined to have John die in prison to make an example of him for speaking out against the corruption within their government agencies… There is no hope of him ever having a fair trial in America.”

But today a report of Spanish Newspaper, El Mundo, reported that Johan McAfee Found dead in his prison cell.

Since there is not much clue through the news report we can get.

But according to many social media reports, John McAfee did sucuide in his prison cell.

Now a news coming from Spanish government that  Spanish court had  approved his extradition to the United States to face charges of tax evasion.

And also Johan McAfee claimed that he has nothing in hand that he earned from Cryptocurrency. Since no one believed at this statement of McAfee.

Well here we can only say Rest In Peace, for John McAfee. Regardless of the point where he tried to manipulate the Cryptocurrency market and involvement in money laundering.

What is USDC Savings Account and How Does it Work