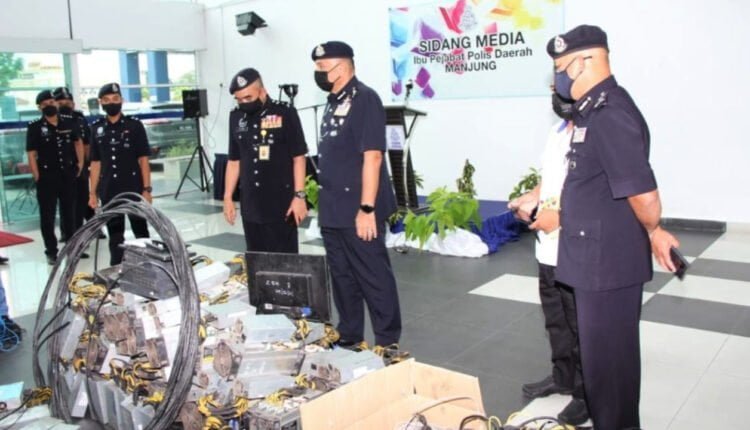 Against the theft of electricity to mine cryptocurrencies, Malaysia’s police seized mining equipment.

At present Crypto mining activities are better options for those people, who want to make money without any high risk. But this situation of crypto mining is not beneficial for those, who have high-cost electricity. But greed is everything, few people are trying to grab free electricity to mine cryptocurrencies like Ethereum and Bitcoin, without caring that they may face big problems in the future.

The latest case is coming from Malaysia, where people were found to run crypto mining activities. People were allegedly using electricity in illegal ways.

According to local media reports of Malaysia, Faridalathrash Wahid, Perak police chief, told about the whole matter in the press conference.

The Chief Police officer said that this latest crackdown on illegal crypto mining operations is a big achievement of the police department. And this crackdown was a part to take action after the number of public complaints.

The Chief Police officer explained that the operation was involved with the Tenaga Nasional Berhad (TNB) and the Sitiawan Fire and Rescue Station. And this operation is the biggest rescue operation of the police department with the TNB.

According to TNB, these miners used around $478,870 worth of electricity so far.

According to the police statement, officers investigated 75 mining firms. Out of these, 30 mining firms were mining cryptocurrencies illegally with the involvement of electricity theft. And as a part of this investigation, officers seized a total of 1,720 Bitcoin mining machines.

Read also: On the past year growth of Uniswap Labs, the CEO is eager on 2022

On the past year growth of Uniswap Labs, the CEO is eager on 2022