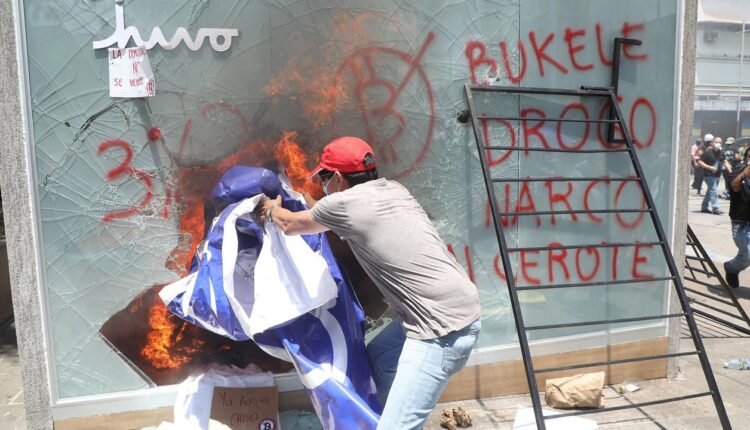 In the present time, oppositions against the Nayib Bukele are showing their baddest nature ever and burned one of the Bitcoin ATM machines in El Salvador.

According to reports, Bitcoin law of El Salvador is successfully working in the country. But still there are many people in the opposition group of Nayib Bukele, president of El Salvador, which are from time to time going against the El Salvador government to criticize and slam the Bitcoin law.

According to the report of News outlet Teleprensa, a crowd of  protesters  including journalists of El Salvador entered the Plaza Gerardo Barrios in the center of the capital city. And they burned one of the Kiosk ( Basically a bitcoin wallet which supports Bitcoin Chivo wallet facilities and was installed by El Salvador government with a total of 200 Bitcoin ATMs in the whole country).

Reports claimed that, These people are those who have support of bad actors and are manipulated by some people to act against the Bitcoin law. Because these protestors didn’t attack another government property, they only burned one of the Bitcoin ATM machines and one piece of furniture in the Plaza city.

It seems that people of El Salvador don’t want to understand the trend. People are not trying to understand that Bitcoin payment is optional for citizens and it is only a mandatory option for Businesses to accept payment in Bitcoin ( which basically changes into dollars automatically).

According to a survey, most of the people oppose Bitcoin law because they don’t have knowledge of bitcoin or crypto assets.