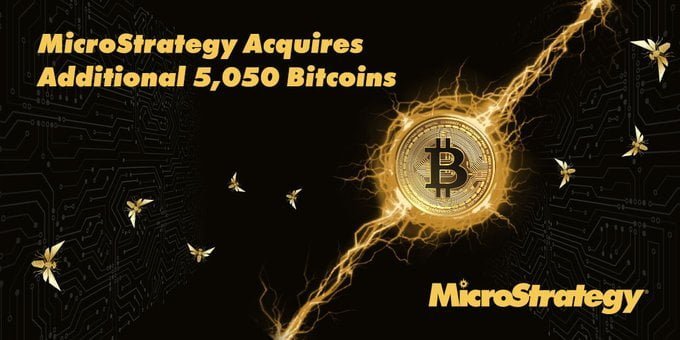 Micheal Saylor shows his more hope with Bitcoin buy. In this month, Michael added 5,050 Bitcoins in his company.

This shows Michael Saylor how much bullish on Bitcoin.

Michael Saylor, CEO of MicroStrategy, has been purchasing Bitcoin since long time. And now in the present time their company MicroStrategy owns a total 114,042 Bitcoins. And the average price of Bitcoins is $27,713 per bitcoin.

Last time, MicroStrategy company added 3,907 BTC at the cost of about $177 million, in between July to August.

Buying the amount and cost of Bitcoins shows clearly how much Bitcoin is expensive but the crazy buying of Bitcoin by Micheal Saylor for his company MicroStrategy shows how much potential Bitcoin has.

Michael is buying for his own company and also suggested many times for those companies to add Bitcoin in their portfolio because Bitcoin is only a hope for rapid growth of  companies. And also he gaves examples of Twitter and Tesla companies and suggested that every company should try to implement the use of Bitcoin.

Crypto Mining In Ukraine Does Not Require License : Crypto Advisor

PayPal’ stablecoins is under development:…