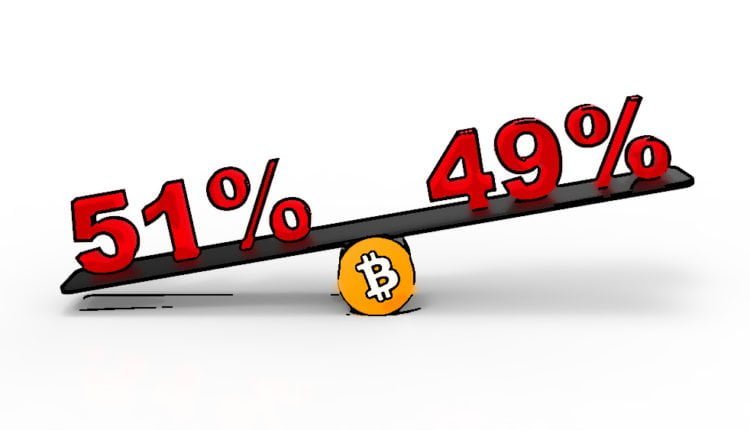 A 51% attack is a type of attack occurred on Blockchain that performed by a malicious miners group having control on 51% or more of the network’s mining hash rate.

After getting the majority of the hash rate attackers group get power to decide which transactions are verified from the pool of unconfirmed transactions.

They have the ability to reverse the transactions which were occurred during they own the majority of hash rate which is also known as a double-spending attack.

There is also a probability that they can control the network completely by preventing other miners to mine as well as can block all the transactions from being confirmed on the network.

The group with the majority of the hash rate would not able to change the consensus rules. They could not change block reward and even not able to reverse the transactions of other users.

They would not able to change the previous transactions data and had no power to create new coins out of thin air.

When Bitcoin users declared their signed bitcoin transactions on the bitcoin network then these transactions will be added to the pool of unconfirmed transactions.

Miners need to find the solution of the very difficult mathematical problem which required high computational power (known as a hash rate) in order to add this block of transactions into the blockchain.

For miners having more computational power have a higher chance of finding the solution of the problem before other miners find theirs in order to add the new block into the Blockchain.

After finding the solution, miner broadcast the new block of transactions on the network where all other miners will check the validity of the block on the basis of the existing blockchain.

So for miner having majority of hash rate ( more computational power) can easily add new block of its own transactions as well as can prevent other miners from mining new blocks( due to low computation power they can’t even find the solution to the problem before him) which leads the 51% attack on the blockchain.

3 How does Bitcoin prevent a 51% attack?

Bitcoin is designed in such a way that 51% attack seems to be not likely to occur on the bitcoin blockchain and if 51% attack performed successfully on bitcoin then it would not be profitable for an attacker.

A 51% attack would be helpful in double the spending of coins on the blockchain.

An attacker would not able to destroy the blockchain or the whole network as it is the short term attack on blockchain.

More powerful blockchains like Bitcoin not likely to be suffering from 51% attack.