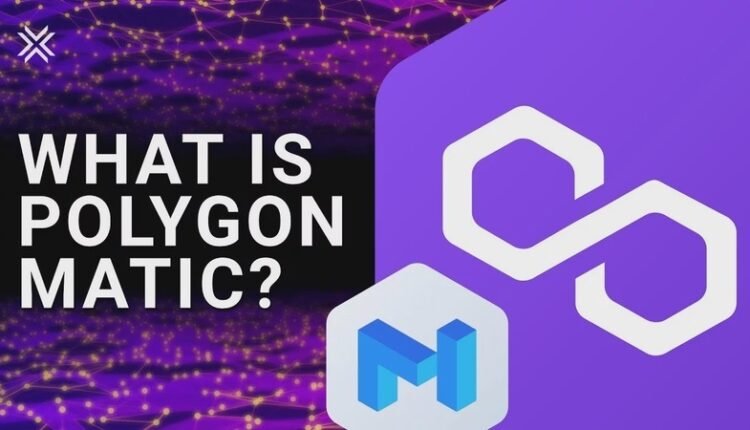 Polygon was created in 2017 by a group of blockchain engineers, including Jaynti Kanani, Sandeep Nailwal, and Anurag Arjun, a business expert. All three of them worked together to start the project, which was subsequently renamed Polygon from Matic.

Because MATIC is still used as the token name, the naming might be misleading. Before entering the crypto world, all three had worked in tech companies. The team was also a major contributor to the Ethereum ecosystem before launching the Polygon network. On the Ethereum protocol, the team focused on developing the Plasma MVP, the WalletConnect protocol, and the more well-known Dagger event notification engine. Polygon is an interoperability layer two scaling solution for constructing Ethereum-compatible blockchains. It was previously known as the Matic Network. The blockchain uses the Matic token for governance, staking, and gas costs, which employs a proof of stake (PoS) consensus process.

What is Polygon (MATIC)?

Polygon responds to some of Ethereum’s current vital issues, such as excessive fees, a bad user experience, and limited transaction throughput.

Polygon envisions a world in which different blockchains may freely and quickly exchange currency and information, removing the technological and ideological barriers that now exist between most blockchains.

The project was originally called adecentralizedofMatic network, but as it’s scope grew, it was renamed Polygon. Polygon is the architecture for a network of massively scalable, collaborative blockchains that preserve their self-sovereignty, whereas Matic was a basic layer-2 scaling solution for Ethereum.

Who is constructing Polygon?

A multi-disciplinary team lead by the four co-founders — Jaynti Kanani, Sandeep Nailwal, Anurag Arjun, and Mihailo Bjelic — is presently working on it. Kanani, Polygon’s CEO, is a seasoned developer with a knack for scaling mechanisms, while the rest of the team has extensive experience founding, managing, and developing digital companies.

How Does Polygon Work?

Polygon offers several modules that allow developers to build and customize their unique blockchain quickly. Consensus and governance modules, as well as execution environments and virtual machine implementations, are among them.

Polygon has a variety of modules that developers may use to create and customize their blockchain easily. These include modules for consensus and governance, as well as execution environments and virtual machine implementations.

All Polygon ecosystem stand-alone chains will initially be Matic PoS chains, but subsequent updates will support additional side chains and corporate chains.

The platform is built to enable a broad range of blockchain scaling methods, such as Matic Plasma, ZK Rollups, Optimistic Rollups, and Validum Chains. These are meant to increase the transaction throughput of linked blockchains while maintaining security and user experience.

Polygon only supports the Matic Plasma scaling solution as of this writing (an example of more viable plasma). It works by dumping transactions off the Ethereum mainchain to Polygon’s Matic PoS chain, finalized on the mainchain. Polygon will support various scaling methods in the next months and years, allowing developers to select the one that best suits their needs.

Despite the renaming, the Polygon network’s native utility token is still known as MATIC. It is mostly used for paying gas costs and engaging in government, but it may also be used across the Polygon DeFi ecosystem, which is quickly developing.

The Polygon software development kit (SDK) is at the heart of the network, and it’s used to create Ethereum-compatible decentralized apps as sidechains and connect them to the main blockchain.

One of the following construction scalability approaches may be used to build sidechains:

Plasma Chains – Bundles transactions into blocks and submits them all at once to the Ethereum network.

zk-Rollups – Allows you to combine numerous transactions into a single transaction.

Optimistic Rollups – Like Plasma Chains, but with the added benefit of being able to scale Ethereum smart contracts.

Polygon’s primary chain is a Proof of Stake (PoS) sidechain where users stake MATIC tokens to validate transactions and vote on network enhancements.

What is the MATIC Token?

Polygon has retained the MATIC utility coin, although having greatly enlarged its basic goal put forth by the Matic Network.

MATIC is utilized in the Polygon ecosystem for various reasons, including network involvement through governance voting on Polygon Improvement Proposals (PIPs), contributing to security through staking, and paying gas taxes.

The Matic token has three use-cases, all of which are typical in the market for utility tokens. It is unclear whether the capability for more utilities will be enhanced as of March of this year.

The MATIC token kept its name despite the branding. It is used to pay network gas fees and to participate in governance. If you want to stake your MATIC tokens, you may use the Polygon team’s Matic Web Wallet.

The remainder of the tokens are distributed as follows:

All tokens will be issued by December 2022, according to the stated distribution timeline.

Aside from tokenomics, Polygon’s long-term goal is to enable a wide range of decentralized financial applications (DeFi) outside of the Ethereum ecosystem. Polygon currently only supports the Ethereum base chain, but it aspires to become a Layer 2 blockchain platform that is interoperable.

The Polygon Bridge is the most practical method of transferring money from another blockchain network to the Polygon sidechain. Because the bridging transaction occurs on the mainnet, you’ll still have to pay mainnet transaction fees.

However, after it’s done, you can take advantage of Polygon’s low costs and quick transfers. Aside from that, certain centralized exchanges (CEX) provide direct withdrawal to the Polygon Network.

There is no consensus on whether sidechains can be classified as a Layer 2 solution in the same way that a rollup can. If you wish to navigate the multi-chain world and weigh the many trade-offs, you must first comprehend this concept.

Each one has its own set of trust assumptions and security, performance, and user and developer experience. Because they inherit most of their security from Ethereum, rollups are one of the most promising Layer 2 scaling options. Other alternatives, such as the Polygon sidechain, are not in this category. That isn’t to suggest it isn’t secure; nevertheless, if bad actors banded together, they could (at least theoretically) seize control of the network. We haven’t received any indication that this is the case, but it’s worth noting. A trust component is required when using a sidechain for the network validators and the bridge between the two chains.

You’ll spend less, have comparable security, and faster transaction times if you utilize a rollup. You’ll spend a fraction of what you’d pay for a rollup when you use a sidechain, but you’ll be compromising on security.

So, which is the superior option? There isn’t an easy solution. They can all be beneficial for certain use cases and complement one another to create a very useful ecosystem.

Here are three aspects that distinguish Polygon from other second-layer scaling solutions:

Polygon now only works with Ethereum. Polygon has plans to interface with additional blockchains in the next months and years, so that might change in the future. The polygon may also act as a blockchain bridge, allowing Ethereum dApps to connect with those on other blockchains like Polkadot and Binance Smart Chain.

The complete process of withdrawing tokens from Polygon to Ethereum takes only 1 to 3 hours. That may seem like a long time, but it’s rather quick compared to another layer two scaling method.

On top of Polygon, there are hundreds of Ethereum Dapps (decentralized applications). Aave, a famous DeFi loan site, has already locked in over $1 billion in value, and the Sushiswap decentralized exchange is also operational on Polygon.

Polygon is a popular gaming platform because gamers can trade NFT in-game stuff for a fraction of the price they would on Ethereum. The following are some of the most popular NFT and gaming applications on Polygon:

Quick swap, a decentralized exchange that delivers a lightning-quick and comfortable experience for traders, is a rapidly popular dApp based on Polygon. When compared to fees of up to $100 on Uniswap, the average price on Quickswap is less than a penny, which is a substantial saving. This enhancement is achievable thanks to the exchange’s off-chain operation, which is considered the next generation of DEXes and the future of DeFi.

How to keep your MATIC coins safe

We hope that anybody who has been wondering what Polygon now has an explanation. Polygon is a low-cost layer two scaling solution with a slew of unique features for users and developers.

Purchasing the MATIC currency is the greatest way to invest in Polygon’s continuing success. However, once you’ve purchased MATIC, you won’t want to keep it on an exchange. This is where the book of Exodus comes in.

Exodus is a non-custodial bitcoin wallet that allows users to keep complete control of their funds. Look no farther than Exodus if you’re searching for a secure location to keep your MATIC.

Polygon, formerly known as the Matic network, scales the Ethereum network via a PoS method. Developers are working to make cryptocurrencies completely seamless and accessible, and Polygon is leading the front by seeking interoperability and addressing long confirmation times. By examining the workings and potentials of Polygon MATIC, it is clear that this platform has demonstrated significant progress in addressing blockchain scaling concerns. Furthermore, various blockchain developers may enjoy constructing their decentralized network because of the polygon platform’s supplied features and tools, which let developers customize their networks.

The Polygon network presents a compelling alternative for numerous up-and-coming projects before Ethereum 2.0 is completely implemented. In this developing decentralized financial environment, the initiative has a lot to offer.