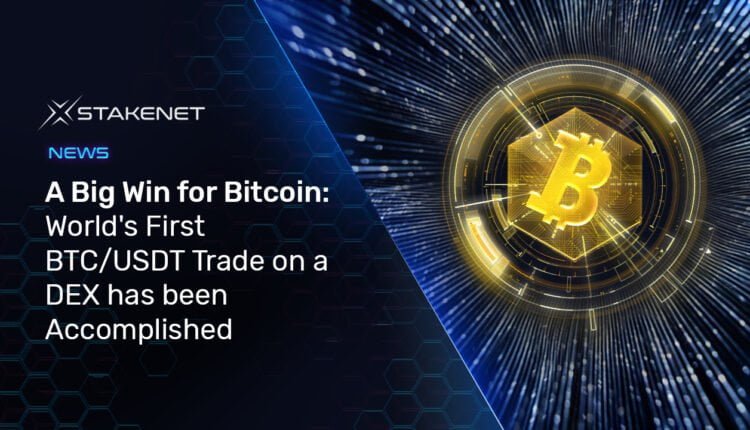 The development team, X9 Developers and their accomplishment marks the beginning of a new and much improved way of trading cryptocurrencies. The team is behind the first ever Lightning DEX, and are the first to achieve a non-client Lightning Swap from BTC to USDT on a DEX with a CEX-like user interface.

This means that for the first time ever, Bitcoin and Ethereum chains have been officially connected over their respective second layers. Trades can be live monitored on the DEX stat page by clicking here.

For the first time ever, regular users will be able to instantly trade or swap cryptocurrencies with low fees on pairs such as BTC/USDT, ETH/USDT, BTC/ETH, and many, many more, fully decentralized with a pro-trader interface as we know it from the centralized exchange experience, as well as through a Uniswap-style one-click swaps for non-pro traders.

The development team is preparing trading bots to stress test BTC/USDT, which will showcase the DEX’s capabilities in handling high tx/sec utilizing the Bitcoin Lightning Network, ETH L2, and the newly added Connext client to compete with centralized exchanges.

The current DEX landscape looks a bit like 90% ETH-only DEXs, and 10% clunky and non-user friendly DEXs, all of which have a few things in common: They’re slow, they’re expensive, and more often than not, very limited on trading pairs – and until now, no other DEX have featured a BTC/USDT trading pair.

Stakenet DEX utilizes the Lightning Network, which is a Layer-2 protocol built on top of the Bitcoin blockchain with a purpose to upgrade the blockchain infrastructure. Transactions on this network are completely off the chain, recorded at settlement, and the transactions are private, cheap, and occur within milliseconds.

The development of the Stakenet DEX allows the world’s first BTC to USDT trade on a DEX and offers immense scalability while providing a win-win solution for blockchain users.

What Does This Mean for the Future of Crypto?

The creation of this highly scalable platform that offers a win-win situation has already set a new standard – a very high standard. With this, traders now have access to a new platform that does not require logins or KYC, one that does not have any limits or insanely high gas fees. Users who hold BTC can swap it for ETH or USDT (all off-chain) bypassing the gas fees, making the Stakenet DEX the first off-chain link for off-chain L2 solutions.

By integrating the Connext Network, users can enjoy the benefit of Stakenet chain-agnostic features, making it a cross-chain architecture for cryptocurrencies that operate on different blockchains. Connext recently released a new protocol called Vector, a cross-chain routing network that can bounce between other L2s, ETH shards, primary blockchains even EVM-compatible chains such as Binance Smart Chain, Ethereum Classic, TOMO Chain, and others.

Stakenet has built a true next-generation DEX solving many of the issues that currently plague the DEX industry, such as ever-increasing costs and transaction times. Stakenet has built their DEX from the ground up using time-tested Layer 2 technologies such as the Lightning Network and Connext Network.

Using Stakenet’s technology it’s possible to make a layer 2 instant swap between BTC and USDT, and that’s just the beginning. Their tireless efforts have rendered them irreplaceable for crypto.

Layer 2 allows Stakenet DEX users to trade faster, cheaper, and more privately than any other DEX available today. Professional trading tools can also be used on Stakenet DEX opening the door for decentralized high-frequency trading. With Stakenet DEX there are only two “expensive” on-chain transactions. Moving your funds off of their main chain to Layer 2 and moving them back on-chain to their main blockchain. Once off-chain, there are no on-chain or gas fees and transactions are settled instantly making it ideal for high-frequency trading.

With more users going towards Layer 2 solutions, Stakenet is a great choice because of its inevitable connection to all other chains. They’ve ensured their long term survival because of Bitcoin’s Lightning Network infrastructure. Any other project that implements the lightning network is instantly compatible with Stakenet DEX.

Originally Posted at
The Capital

VRJAM Announces The Initial Exchange Offering Of Its Revolutionary Metaverse…

Ethereum co-founder suggests remaining away from…