What are Atomic Swaps? The Complete Guide 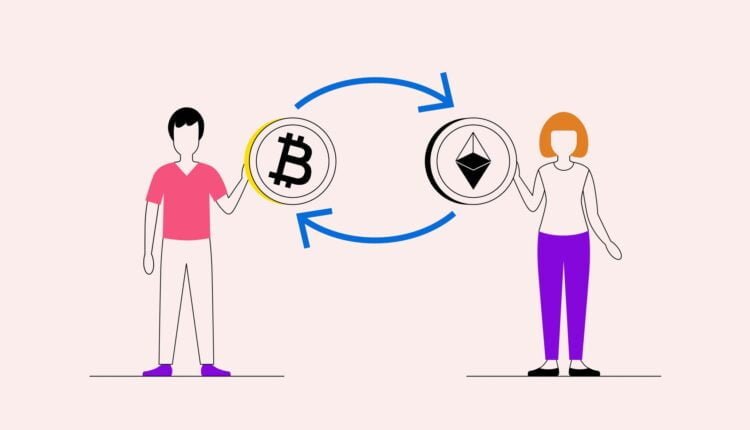 The trading between cryptocurrencies will generally involve high costs. It will also need you to do several things. First, a cryptocurrency exchange will have to be identified which supplies the same currency. You will have to register and follow the KYC procedures to check your identity once you have found this exchange.

After which you can deposit and trade the required cryptocurrency. This includes extra costs and waiting until your coins arrive in the wallet. This condition is not ideal. However, in a fully decentralized environment, users can trade the cryptocurrencies directly without any third party involvement. This is precisely where the Atomic Swaps concept comes in.

In this guide, we will discuss the complete aspects of the atomic swap, it’s functioning, and the benefits of atomic swaps in the crypto environment.

What Are Atomic Swaps?

An atomic swap is generally a smart contract technology that allows one cryptocurrency to be traded for another without the use of centralized intermediaries, such as exchanges. Throughout this process, users have complete control and possession of their private keys.

Atomic swaps can occur directly between blockchains of various cryptocurrencies, or they can be made off-chain, away from the main blockchain. The atomic swaps first came into attention in September 2017, when an atomic swap was made between Decred and Litecoin.

The Atomic Swap was first proposed by Tier Nolan at the BitcoinTalk Forum in 2013. Nolan explained the fundamental rules for cross-chain cryptocurrency swaps through various forms of blockchains.

The atomic swap is often referred to as atomic cross-chain trading. This concept has been around since July 2012. It started with the initial effort to establish a trustless exchange protocol called P2PTradeX by Sergio Demian Lerner. It was further refined and formalized in May 2013 by Tier Nolan.

Nolan’s algorithm was further improved by former Bitcoin developer Mike Hearn and others. Their improved solution provided for the direct exchanging of coins on bitcoin-derived blockchains, without protocol support.

An effective process to carry out Nolan’s systematic explanation of the atomic swap took place in 2014, when the developer jl777 carried out a test of litecoin swap with dogecoin. Decred further streamlined the code to make atomic swaps more readily available, with the successful implementation of the litecoin atomic swap in September 2017.

How Does Atomic Swaps Work?

Atomic swaps protocol makes use of the hash timelock contract (HTCL). It is a unique type of smart contract that locks the transaction and involves the authentication from both parties to carry out the exchange. The contract made using HTCL technology involves two special features:

1) HashLock: The HashLock technology makes sure that the cryptocurrencies are traded only after all parties have signed off on their respective transactions.

2) TimeLock: The TimeLock system guarantees that the transaction takes place within a given timeline and returns funds to the depositor if it is not completed. This secures the transaction by time constraints.

Imagine a scenario of trading between Alice and Bob. Let’s use the Atomic Swap to achieve this.

Initially, Alice will build an HTCL address and then deposit the cryptocurrency. After that, a hidden passcode is developed for this cryptocurrency. This is called a preimage which is then hashed. Then Alice sends this hashed preimage to Bob.

Bob now authenticates that the cryptocurrency has been deposited. Bob will then deposit it at a new address that has been generated with the same hash. This locks both the transactions together.

Now Alice, to unlock the cryptocurrency, there is the need for the preimage or the secret passcode sent by Bob. While in this process, the preimage then goes on to the blockchain and further becomes public.

Both contracts are refunded if the preimage is not shown even after 24 hours. But if we assume Alice waits 23 hours and 55 minutes until she uses the preimage to unlock Bob’s contract, now only has 5 minutes to unlock Alice’s contract. Then it can be refunded.

If any issue prevents this from doing. It will double the refund delay for Alice’s contract to 48 hours. Now Bob still has 24 hours to unlock if Alice waits for 24 hours.

This refers to the fact that an atomic swap has been processed.

Let us assume A is a dealer involved in exchanging 100 Bitcoins (BTC) into equal Litecoins (LTC) with B. A submits the transaction to the blockchain of Bitcoin and shares a cryptographic special key hash with B, who deposits his cryptocurrency in an address generated using the same cryptographic hash.

B repeats the same process from his side by similarly sending his transaction to the blockchain of litecoin. Both A and B use their respective numbers to unlock their respective funds. They have to do everything within a defined timeline or the transition will not take place.

Once A and B have access to their respective assets, the Atomic swap will be completed.

1) On-chain Atomic Swap: It literally involves the swapping of tokens by means of two different blockchains and their native coins. The trade is carried out on the blockchain and is considered safe and provides more security for the concerned parties.

2) Off-chain Atomic Swap: This transaction method is less used as the transaction takes place on a secondary layer of blockchain outside the blockchain network. These are faster and provide more throughput but are complex to perform

The process of atomic swapping is one of the standard ways to exchange different crypto coins listed on distinct platforms which is utilized by the other exchanges. It offers an inexpensive and quick way with a high level of interoperability to swap cryptos.

When the users trade through an Atomic Swap, it essentially removes the middleman from the exchange. The atomic swaps allow the users to trade a wide range of coins which are not available on the other exchanges

The atomic swaps were created to ensure the trading amongst every cryptocurrency pair. The atomic swaps also support the integration of wallets, allowing the decentralized trading of currencies entirely from the software, mobile or web wallet.

Centralized digital exchanges are susceptible to security attacks and massive hacks. Atomic swap, on the other hand, provides a safe platform between the two parties to the deal where private keys are revealed only to them.

The time-limited transaction guarantees the transparency of the transaction where the rejection of both results in the refund of their assets.

1) Decentralized Nature: Unlike the centralized crypto exchanges, Atomic swaps are fully decentralized, enabling cryptocurrency traders to exchange the digital assets without the need for third-party arbitration, and no counterparty risk.

2) Increased Security: HashLock and TimeLock technologies in HTCL contracts used by atomic swaps provide traders with better reliability and assurance. They are assured to be able to receive their currencies back in the event of delays or disputes and have full control over the transactions.

3) Less Trading Fees: The atomic swaps eliminate the operational costs and the trading fees linked with the centralized exchange platforms. The only costs involved with atomic swaps are the standard blockchain processing fees, making them free from any of the trading charges.

4) Altcoin trading flexibility: Some of the exchange platforms do not allow the traders to exchange all kinds of altcoins. Atomic swaps solve this problem by allowing virtually all forms of altcoins to be exchanged. They have a large number of Atomic swaps coins list.

1) Complexity: As they provide higher stability and security, atomic swaps come with trading requirements that are tougher than those placed by exchange platforms and enable the parties to communicate without direct contact.

2) Limited Liquidity: One of the limitations of the Atomic swap is its liquidity. This means that it will be complex for the traders to connect and exchange the cryptocurrencies without an exchange platform.

3) Privacy Issues: The execution of the transactions on the Atomic swaps takes time. These results in the transaction being active on the blockchain network for quite a long time, which further gives time for the hackers interrupting the process and gathering private information about traders.

With the rise in the technology of atomic swaps, we can see a high level of acceptance between decentralized exchanges and wallets.

However, atomic swaps have to be incorporated through existing wallets and facilities. There really needs to progress in customer interface in order to make cross-chain trade simpler for the common users.

Atomic swaps have the ability to diversify crypto space and expand global adoption. It is a modern form of exchange mechanism for the convenience of the consumers.

Atomic swaps can even incorporate wallets, enabling the decentralized exchange of currencies directly from the software, mobile or online wallets.

Thus Atomic swaps are still a relatively young concept that needs to walk the long path of crypto markets and become popular with crypto traders.

SEC chair says Bitcoin was created “as a reaction”…