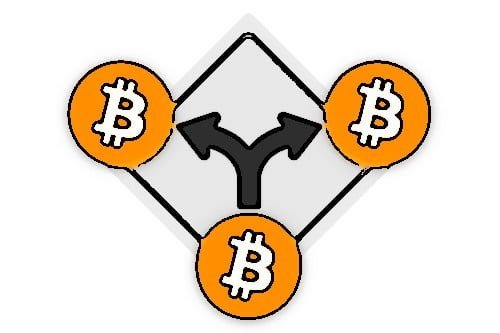 1 WHAT IS FORK IN CRYPTOCURRENCY ?

According to the type of the update it is of the mainly two type type.

SOFT FORK: As by name it indicates that soft = software i.e software update in the existing old software of the blockchain technology.
It is just like improvement in the old software to make it more better/efficient/responsive.
A simple example of soft fork is bitcoin segwit wallet launch by replacement of existing core wallet , since these updations are not easy as we are thinking like an update android application that we update by visiting at app-store/play-store but it involves many types of change that people who are supporting it can’t accept easily ( we will discuss about this fact in the last of this post ).

HARD FORK: Like the soft fork, it is also based upon the updation of existing technology but here the concept is small tedious.
Here of us need to know that in blockchain technology there is nothing like a change of the written data i.e at one side increment and at another side particular amount decrement, but in the actual transfer of the data take place and that takes time to confirm by passing through different nodes.
Sometimes we need to change the direction ( only direction not the data value ) of the flow of the data and that can be done by the hard fork.
In Hard fork flow of the data will split into two different paths with the same data number/value.
So here generation of new chain occurs where we can have a new coin algorithm as a new coin.
Example of a hard fork is Bitcoin Hard Fork that results in bitcoin cash and bitcoin.

3 FORK IN CRYPTOCURRENCY IS GOOD OR BAD ?

Absolutely good, because the main reason behind this factor is that we can’t develop a system which is 100% ideal but time to time new improvements we can do with the updation, here fork does the same work.

In the soft fork, the transaction that goes on in the whole system can skip the old nodes in cryptocurrency miners system and that will create a problem for miners to update Their system with the new set-up.
In Hard fork, the algorithm chain split into two part, now at this point, a problem will arise that we with which chain we should go.
Since both of the chain lines are part of the existing blockchain.
So here all depends upon the users ( traders/miners) that with which side they will go.

As miners can’t go with the both because support of mining is associated with the single side at one time possible for a particular miner, so poll will be created by the coin team and if they will get support of 51% to go with fork then they will do fork otherwise they will postpone for next time ( usually a year ).

What is Sybil Attack? How Blockchain protected against it?

I hope Cardano founder and ADA are successful, Says…

Binance will not acquire FTX amid this downturn of…