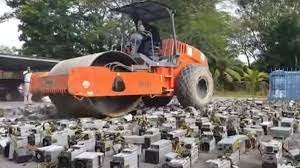 Reportedly, Malaysian Authorities took action against illegal Bitcoin miners which were involved in the theft of electricity. They destroyed 1069 Bitcoin miners after a court hearing.

In February 2021, Malaysian Authorities accused a few Bitcoin miners who were using electricity illegally. Authorities took action against those miners and arrested 8 people. At that time arrested people were accused under Section 379 of the Penal Code of Malaysia regarding electricity theft. They were fined around $2000 & 8 month prison.

According to a report, on 16 July Malaysian Authorities took action against Bitcoin miners who were using electricity directly from the Malaysian Electricity grid supply. The amount of electricity theft by the miners was around $2 million.

Sarawak Energy Berhad found lots of loss in their electricity supply and then investigated. After their own investigation they report it to the Malaysian Authorities for such unfair activities by miners.

According to a video, Malaysian Authorities destroyed miners with the help of Steamroller. In February they seized their mining  equipment which was worth $1.2 million and now finally on 16 July they ran over the 1,069 seized ASIC miners with a steamroller.

It seems, illegal mining became a usual crime in most of the countries where bitcoin mining is legal. Because a recent action by Iranian authorities we can see where they seized mining equipments because they were stealing electricity from the power grid directly. See full report here.

Read also: A Meeting On StableCoin By U.S Regulators On 19 July

A Meeting On StableCoin By U.S Regulators On 19 July

XRP will Be Listed by Japanese Exchange TAOTAO on…

Binance will suspend deposit & Withdrawal of…