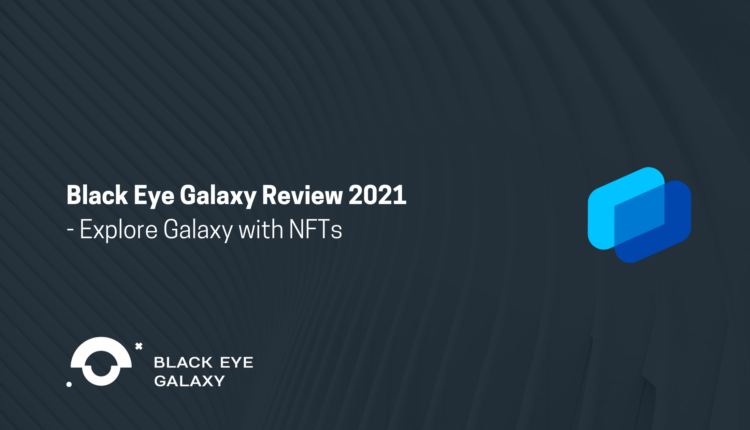 One acronym that has consistently trended in almost every crypto table for the past few months is NFT. Indeed, NFTs, non-fungible tokens are the most recent applications relative to the blockchain technology economy. While some see it as an opportunity, others believe it’s a trap. What’s the truth it is hard to say but one thing is sure, NFTs are here to stay and are not leaving the trends anytime soon.

A relatively recent incorporation into the NFT space is the metaverse or virtual world, which allows the transfer of assets between parallel universes using NFTs. You can buy almost anything — lands, audio, photographs, etc. In fact, according to a recent report, the price of land in these virtual worlds is competing with the real-life real estate ecosystem, which confirms the disruptive tendency of this integration and innovation.

Taking a step from the norms, Black Eye Galaxy decided to explore the space using metaverses and NFTs. In case you are wondering how this article will guide you through the basic concept of NFTs and metaverses features featured in Black Eye Galaxy. Then, at the end of this guide, you can decide whether it aligns with your profitability goals or not.

What is the Black Eye Galaxy?

Essentially, the Black Eye Galaxy is a cross-chain NFT virtual universe with quite a unique approach to incorporating metaverses and NFTs. As opposed to purchasing assets like land, books, game items, or other items found in real-life utility, Black Eye Galaxy decided to take us into space! Yes, you can buy planets and solar systems. Although somewhat recent, this is quite a unique and exciting concept. We’ve seen virtual worlds of platforms such as Decentraland and other innovations exploring this space. However, the black eye view approached this with quite an exciting perspective.

Here, users can organize discovery missions, move to new planets, begin civilization on the current occupants of such planets, and trade land on the planet. It groups stat systems into forms of clusters, which it indicates on the galaxy map. NFT tokens represent inhabited lands or planets, and as such, the planet owner can change its name, which will ultimately reflect on the planet catalog.

How Does it Work?

In sum, as a space metaverse, you can access elements like starships, planets, star stations, all as NFT. Every planet features distinct natural resources that you can discover and mine as an owner of such a planet. However, how many resources you can discover are depends primarily on your plant and its attributes. From the official developers, on average, you can find resources worth about 500 to 5000 USD, which will be in the BYG token.

Another practical strategy to make a good reward is new planet discovery. To do this, you’ll have to purchase a spaceship, send it to space in search of a new planet. For each planet discovered, you get to access 50% of the final price when sold on Black Eye Galaxy’s internal marketplace.

The best way to add value to your token is the inhabitant planet. As an owner of such a planet, you can begin civilization anew and sell lands on the planet. Recently, the developers even hinted at creating a VR universe similar to SandBox where users can travel through these inhabitant planets, establish futuristic landscape and structures, as well as future various races and architecture.

As mentioned earlier, the project is a cross-chain-based innovation that started from the BSC, Binance Smart Chain, with intentions to incorporate other 1-t level chains as the project progresses. Each star cluster on the platform will have its distinct blockchain. Thus, considering this somewhat distinctive and unique gamification, in no time, this project will definitely establish a community of dedicated fans and gamers alike.

Now that you have a concise overview of how the project work, let’s take a step further into identifying the relevant components, what they are, and what they do.

This is the center and the primary focus of every activity on the black eye galaxy. It is where mining takes place. Every planet features distinct physical attributes, which directly influence the type end amount of resources the planet has. Depending on this element, resource mining is classified based on complexities, from complex to medium to easy. Complexity determines the time taken to mine resources and the amount you can mine depending on the technology you presently have in your civilization. Again, you can always change your planet’s name at will.

These are the core of civilization on the platform. They are planets very similar to earth, and as such, people can reside on them. Here, you can sell the lands on these planets as NFTs to develop cities and advance population and technology as well as begin a new civilization. With promises to partner with other VR projects, Black Eye Galaxy will, in no time, become a significant operator in the virtual land ecosystem.

You need to own a spaceship before discovering a new planet. After buying a spaceship, you’ll then organize a discovery mission to your target stat system within reach of such a ship. Undertaking discovery mission is carried out by staking these spaceships in relevant web pages.

On reaching the target star system, you’ll discover new planets, which people can purchase on the marketplace. As a discoverer, you’ll access 50% of the total sales revenue after subtracting the mining costs.

For every plant inhabited, you can create your civilization, where the inhabitants evolve, and you can advance the technology. DAOs govern civilization, and they generate revenue from taxes from members’ transactions to create a budget.

After you mine resources from a planet, the planet recovers it back naturally. However, it’ll take an extended period, and the extent of resources recovered will greatly differ from the original.

The Time Difference in the Virtual Universe

A day of our time in real life equals a year in the virtual universe. This signifies that suppose your spaceship must travel for seven years to reach the targeted star after staking it for a discovery mission; you’ll have to wait for a week before it reaches the star system. Besides, suppose the full resources mining on your planet will last ten years, then you’ll have to wait for ten days while staking the subject planet for mining.

Essentially, the primary NFT elements on this platform are lands, planets, space stations, and space ships. Black Eye Galaxy records metadata such as the names, attributes (covering everything from visual representation and capability), the owner, and ownership history; all this information is recorded on-chain. As of today, the chains utilize are the Binance Smart chain, Ethereum smart chain, built on BEP 721 and ERC 721 standards, respectively.

The NFT representing the land indicates a location within a planet and signifies the ownership of such a location. Besides, it dictates the number of mineable resources, values on land depending on its attractiveness and desirability, represents unsold land owned by civilization. In addition, each planet features a specific amount of land on them right from inception.

This is the native token used on the Black Eye Galaxy platform. It is a cross-chain token, and as such, available on every blockchain the project utilizes in its operations. It has a fixed supply of a billion tokens, with no future intents of inflation. Its use cases cover everything from staking to resource purchase. Every user needs to stake BYG tokens before they can take part in the civilization governance. Besides, it serves as the primary currency utilized to purchase every required resource for actives pertinent to the project, such as spaceship travels for star system discovery. In addition, the platform rewards its users for bonuses and other activities using the BYG token.

Recently, Black Eye Galaxy announced its launch on SuperLauncher. This will be taking place on 26th June 2021 on the super launcher, making it the first platform in the NFT space to take such a step. During this launch, two pools will be available. The first route is for the Black Eye Galaxy community. However, you must be white-listed by filling a form before you can be eligible to participate.

The second round is for holders of the LAUNCH token, and this will be determined by the tier system features on SuperLauncher. The date for this is 3rd July 2021. At the end of both pools, according to the official sources, they will lock liquidity and commence trading. Again, to participate in the whitelist, filling the form mentioned earlier is necessary, ae are winners of the whitelist will be made public on 25th June 2020.

If you fancy the idea of gamification and VR relative to the crypto space, then this project might just sound right for you. The explored space is relatively new, but evidently, it is quite a promising one and pretty accessible. Thus, if the idea of planets, space, intrigues you you might want to get started. However, before doing so, investment opportunities require extensive research. Thus, assess the pros and the cons. Consequently, if they align with your ultimate profitability objectives, then you can go ahead.

Originally Posted at
The Capital

5 Reasons to Use Bitcoin for Remittances