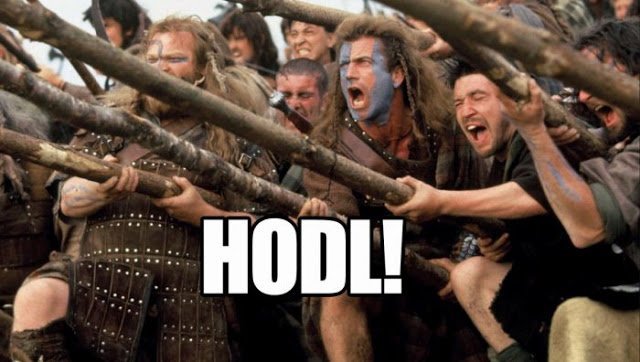 In Cryptocurrency world there are many words used in different styles and large no of acronyms used by Traders and Investors.

1. HODL : It is derived from hold which is used to represent that you are holding your Crypto. This term is mostly used by investors when market is in very panic situation then Investors used term HODL to show that they are not selling anything , those investors known as Hodlers.

HODL first time used on Bitcoin Talk Forum by GameKyuubi under the thread ” I AM HODLING ” .

2. BUILD: It is derived from build which is used to represent that you are building something.  This term mostly used by Hodlers which started building something when the market is in worst conditions to prove that they are doing developments even in the bear market.

In this bear market? Nah bro, I’m bullish on #BUIDL.

3. SAFU : It is derived from safe which is used to represent that your Cryptocurrency is safe.This term is mostly used by Exchanges and Wallets to provide surety to their users that their fund are SAFU.

4. FOMO : It stands for Fear Of Missing Out. It is used to represent that people are getting feared to miss out the profit in pump of coin.

This term is used when a coin get pumped heavily mean price of coin increases suddenly.

7. FUD : It stands for Fear Uncertainty and Doubt. It is used to represent that people got feared from dump and they are in uncertainty to sell or hold and big doubt of falling price more. This term is used when a coin got dumped suddenly very fast.

8. ROMO : It stands for Regret Of Missing Out. It is used to represent that traders are regretting by missing to buy a coin at dip before pump. This term is used when a coin pumped and most people not able to buy it at low prices before pump due to many ongoing FUD in market.

9. FOLE : It stands for Fear Of Losing Everything, It is used when a coin continue to dump to new ATL’s then HODLERS getting feared of losing whole amount due to price tends to zero.

This is the REKT situation. Everyone got feared of getting rekt.

10. BULL : It is used to refer the market condition in which almost all the coins started pumping.

11. BEAR : It is used to refer the market condition in which almost all the coins started dumping.

12. WHALE: An account with large no of assets.It refers to someone having very big amount of assets value.

13. BAGHODLER: Someone hodling large no of coins, having big part of supply of a coin.

14. BITCOINER: The Cute Guy who is interested only in Bitcoin.

15. REKT : It is derived from “wrecked” . It refers to someone who lost everything due to losses happened in bearish market.

16. ATL : It stands for All Time Low. It is used when a coin touched its lowest price in history.

17. ATH : It stands for All Time High. It is used when a coin touched its highest price in history.

18. ALTCOIN : Any Cryptocurrency other than Bitcoin known as Altcoin.

22. MCAP : It refers to the MarketCap of a cryptocurrency.

23. SHITCOIN : A cryptocurrency which have no use and no potential to rise.

30. WHEN MOON or WHEN LAMBO : Asking for rising of a coin in very high value.

31. MOONING  : Sudden Rising of a coin in very high value.

32. TO THE MOON : Referring to Very high value pump.

33. BULLISH : When a coin looking like will rise or start rising its value.

34. BEARISH : When a coin looking like will fall or start falling its value.

37. PUMPING : When the value of a coin start rising suddenly

38. DUMPING :  When the value of a coin start falling suddenly

40. SOON : The upcoming time when there is something going to happen.

41. IEO: It stands for Initial Exchange Offering. These are just like ICOs but the exchanges offer the token sale on their exchange platform and list them directly after the token sale. Binance exchange was first that started the concept of IEO in 2017.

Please Comment if any term missed or there is new term which is not referred above.