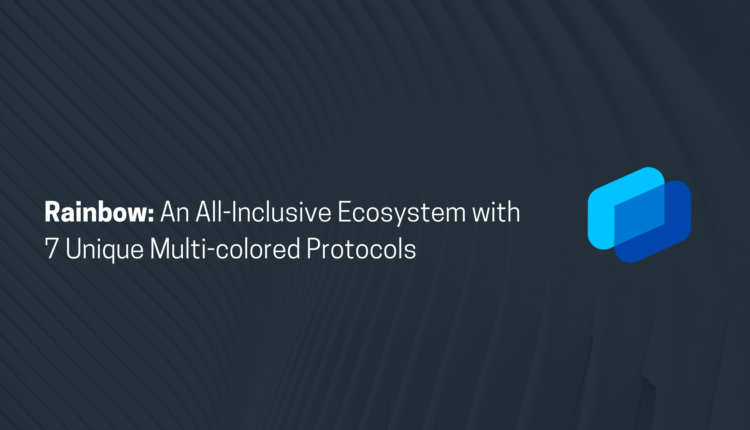 Rainbow Token ($RAINBOW) is a revolutionary multi-faceted token at the heart of the Rainbow ecosystem. The project was designed by a UK-based team, comprised of experienced programmers and investors in the decentralized finance (DeFi) space.

The project backers launched the Rainbow ecosystem to introduce a low cost, user-friendly and accessible platform that allows ordinary folks to interact with crypto. The project aims to offer various services such as decentralized applications, an NFT play-to-earn-while-away game, and more to foster widespread crypto adoption.

The Rainbow project is also committed to creating a greener future for everyone on the planet via its planet and humanitarian charities.

$RAINBOW, the ecosystem’s native token, is built to be hyper deflationary with real utility that benefits holders and investors. The token is designed to be fundamentally bullish, resilient and sustainable. The crypto asset holds massive upside potential, given its utility on multiple products behind the Rainbow brand.

Within a few short months, $RAINBOW has amassed a market cap of over $20M and deep liquidity on PancakeSwap. Currently, 42k+ bullish crypto enthusiasts are holding the inclusive and ethical BEP-20 token.

Rainbow is in its infancy stages, which means that $RAINBOW still has massive growth potential as the project attracts new investors and integrates game-changing solutions into its ecosystem.

The Protocols Composing the Rainbow Tokenomics

The Rainbow protocol employs seven unique protocols that combine in the smart contract to create a robust and resilient cryptocurrency that carries the strength of seven tokens in one.

Each of these protocols integrates unique features that make the native token a worthwhile investment. The Rainbow smart contract taxes 7% from every transaction and distributes the fees evenly across all seven protocols.

Here is a look at the popular features derived from the seven colours of the rainbow that combine to give $RAINBOW a unique position in the crypto space:

The red protocol is the hyper deflation function that burns 1% of every transaction by sending it to a dead address.

The burning mechanism permanently takes away tokens from circulation, tightening supply amid increasing demand, allowing $RAINBOW to appreciate over time.

This approach allows investors to remain bullish on their holdings as the Rainbow community grows, making $RAINBOW a lucrative long-term investment.

The orange protocol is the buyback function that takes a cut from buy and sell trades and accumulates the fees into the Rainbow contract. The protocol converts these funds into BNB to buy $RAINBOW from the PancakeSwap liquidity pool at a later date.

Once the token buyback is activated, the function automatically triggers each sell transaction to purchase tokens from the liquidity pool. The buyback amount is then burnt, instantly reducing the circulating supply and pumping the token price, generating hype for the Rainbow ecosystem.

The token buyback is essential because it effectively raises the $RAINBOW price floor and incentivizes increased buying from crypto market participants on the sidelines.

The yellow protocol rewards all $RAINBOW holders with extra tokens simply for holding. The function deducts 1% from every transaction and automatically reflects the funds to every person holding $RAINBOW based on the total supply of tokens they have.

The green function is dedicated to helping make the world a better place through charitable efforts. The protocol, designed to invest in the future of humanity and the planet, deducts a portion of each transaction and channels it into a charity donation pot.

The Rainbow team pledges to use these funds to invest in all areas of charitable work, including but not limited to: cancer research, animal welfare, healthcare, habitat and ecosystem preservation, and poverty alleviation.

Rainbow allows users to vote on which charities get funding from the green protocol organically and transparently. In future, users will be able to deploy $PRISM, the ecosystem’s governance tokens, to say which charities the community should support and vote on other development decisions that determine which the project takes.

So far, the ecosystem has donated a collective $43,750 to charities worldwide, including the Rainbow Trust, Save the Children and Oceanic Society.

The blue auto-liquidity function is dedicated to growing the underlying $RAINBOW liquidity with each transaction.

The protocol takes a portion of each trade and puts it towards the liquidity pool on PancakeSwap. This serves to increase liquidity for users swapping $RAINBOW in and out of the pool, ultimately creating a more substantial token that is less vulnerable to wild market price swings.

This function offers the project team a small cut to develop and market the $RAINBOW token. The Indigo protocol takes 1% from each transaction, sells it into BNB and channels the funds to the marketing wallet.

The team uses these funds to get the word out on the project, helping to increase token holders and attract new investors.

Last but not least, the Rainbow protocol integrates an automatic built-in giveaway system that rewards users by chance during a $RAINBOW buy transaction. The function grows a portion of tokens and holds it in a side-pot inside of the smart contract.

Once the lottery threshold is reached, the protocol randomly releases an extra lump sum of tokens. The funds are then automatically credited to the wallet address that performed the purchase transaction.

The lottery function adds an extra incentive to purchase $RAINBOW and makes the token more fun to buy. The protocol has so far dished out $500K+ in rewards to lucky community members who have received the entire prize pool on offer.

The Rainbow team is currently working to roll out the Bifrost Launcher. This decentralized self-managing token sale service offers developers a new way to launch their projects to users seamlessly.

Bifrost stands out from the competition with its token sale service that offers crypto dev teams a user-friendly interface and improved customer support. The brand new Launchpad allows developers to use $RAINBOW to discount launch fees, further increasing the native token’s utility.

The UK-based team is also working on releasing new solutions such as PRISM, a component of the Rainbow ecosystem that allows investors to generate lucrative earning streams via a staking & farming sub-ecosystem.